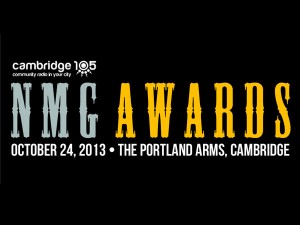 Details of the nominees in the New Music Generator Awards have been announced ahead of the event at The Portland Arms, Cambridge on October 24th.

The awards – hosted by community radio station Cambridge 105 – are sponsored by Half Ton Studios and Greg’s Greats Records and supported by Skinny Kitten Events, Toon-Teen Industries, Washing Machine Events and The Folkstock Foundation.

CC Smugglers, Fred’s House, The Façade, The Willows will face off for Best Folk/ Roots Artist.

In total 63 artists across 12 categories were included in the original long list.

There is also an audience vote category where all artists included in the long list will go up for a vote for two weeks commencing October 10th, via the NMG Awards Facebook page (https://www.facebook.com/nmgawards).

The awards will be presented to winners by special guests including Julian Huppert MP and BBC broadcaster Sue Marchant.

The event will be recorded for later broadcast on Cambridge 105.

A full list of nominees can be found at https://www.nmgawards.com

All artists on the short list are invited to attend the awards for free, while limited tickets will be available for sale to the general public priced £5.

Cambridge 105 and the NMG Awards celebrate and recognise the talent of the local music scene in Cambridge and surrounding towns and villages across all music genres and ages.

The NMG Awards evening will take place on October 24, 2013 at The Portland Arms, Cambridge.

The NMG Awards are open to any artist who has been featured on Cambridge 105’s New Music Generator show in the 12 months to July 31st, 2013, provided they are based within 50 miles of Cambridge city centre.